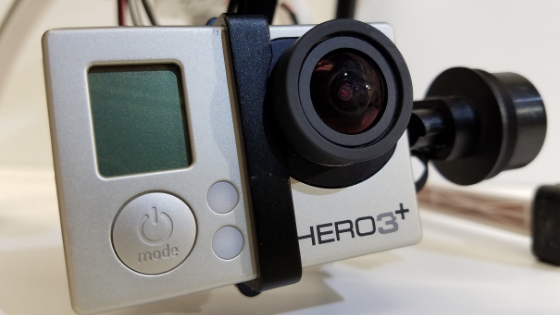 Searching for a drone to attach that GoPro camera to? We’ve come up with a list of the 5 best cheap drones for GoPro cameras.

Drones are super fun but they’re even cooler when they have a camera. And while there may be a lot nicer drones out there with their own cameras and gimbals, a GoPro still makes a pretty good drone camera.

If you’re looking to get some good aerial photos and video without going overboard on price, check out the list below.

What Makes A Drone The Best For GoPro?

There are a few things to keep in mind when looking for a cheap drone for a GoPro camera. Certain features are really beneficial when trying to get some good aerial video.

The first one is power. This is a must since the drone has to carry the extra weight of the GoPro. Look for a drone with brushless motors, most larger drones have them already. These will have enough power to let the drone maneuver with the additional weight of the camera. All of the drones in this list have powerful brushless motors that will be able to handle the load of a GoPro.

Flight time is definitely a factor when it comes to a good drone for a GoPro. Larger and smarter batteries allow for extended flight times. Look for a drone with at least 10 minutes of flight time. Keep in mind that most advertised flight times don’t consider the camera’s weight, which can reduce it significantly.

When using a GoPro on your drone, you also want it to have really good hovering ability and be easy to fly. Your video and pictures will come out much better. It’s best to have some sort of position control or guidance system as well.

A drone with GPS positioning is a really nice bonus. It allows for precise position holding and flight path automation like waypoint flying and follow modes. With these modes, you can focus more on setting up your shot while letting the drone fly itself.

It’s nice to be able to attach a GoPro to a done with a fixed mount, but if you’re trying to get that super smooth drone video then you’re going to want a gimbal. Look for the ones on this list that have gimbal compatibility. There are a couple that have mounting positions for a few different gimbals out there, and even have built in gimbal controls on the transmitters.

Last but not least is range. When taking some drone footage with your GoPo, you’ll want a drone with a decent transmitter range. Look for drones with a range of at least 100 - 200 meters.

And remember, when flying any drone with your GoPro attached, be sure the camera’s WiFi is OFF. It operates at the same frequency as the transmitter. The WiFi can interfere with the control transmission and severely limit your range.

Range goes hand in hand with the flight time. If you’re looking at a drone with a long range, make sure it’s flight time is long enough to support it.

The Force1 F100 Ghost drone is the cheapest GoPro drone on this list. It’s also a drone that just has manual controls, no automation or guidance. Horizontal stability control is all that’s available. The lack of fancy control is made up with a VERY affordable price and the option of an included action camera.

The F100 has two different speed modes available. A low speed, that limits the power and response of the motors, for beginner pilots. And a high speed, for more experienced pilots, that lets you tap the full power of the brushless motors.

GoPro camera compatibility for the F100 Ghost is limited to the Hero 3 & 4 models. There is also an option to bundle the drone with a 1080p action camera that will fit into the same camera mount, so this one might be a good choice if you don’t already have your own GoPro.

Even though this drone doesn’t have any sort of guidance, it will perform some tricks. The F100 performs flips at the push of a button, which is kind of cool for a drone this size.

The F100 Ghost drone comes with 2 batteries, which is a nice bonus. Each one is advertised to provide about 15 minutes of flight time, with a range of about 500 meters.  The extra battery doubles your flight time between charges.

Click the image above to see the Contixo F17+ at Amazon

Even though the Contixo F17 comes with its own camera, it’s still a good drone for GoPro. The F17+ comes with a 4K, 16MP action camera. Which is not too shabby considering the price. It even has a companion app that you can live stream video from the drone with. But it only has a range of about 30 feet.

But there is a trade-off. This drone doesn’t come with any sort of guidance system, it only has stability control to keep it level. So, it may be a little more difficult to fly without any sort of automation to help you out. If you’re a beginner, you may want to brush up on your flying skills a bit before trying to film with this one.

The Contixo F17+ has different mounting attachments, which make it compatible with a range of different action cameras. For GoPro specifically, the F17+ works with the Hero 4, 5 and Hero session 4 and 5, per Contixo’s website.

This drone also comes with an aluminum “travel case”, but you will have to disassemble it to get it to go back in there. Honestly it’s kind of a pain in the ass to have to take off the prop guards, props, landing gear and camera every time you want to put it back in the case.  It's really not practical.

It may not look like it on the surface, but the Cheerson CX-20 is the best cheap drone for a GoPro camera. This highly up-gradable drone is a great choice if you like to tinker with your stuff.

Ardupilot firmware controls the CX-20, which is a proven multi-rotor flight control software. If you’re not familiar with Ardupilot, it offers a fully calibratable control software that can be configured through a few different ground control applications, like Mission Planner.

You can also use Mission Planner to calibrate the flight controller in real time, download data logs for troubleshooting and program flight paths for the CX-20 auto/waypoint modes.

The built in GPS positioning has several other modes as well, like position hold, return to home & guided modes (guided requires a telemetry upgrade).

The CX-20 is very close in size and even the look of the Phantom line of drones, and offers a lot of the same features at a MUCH lower price. Plus it’s configurable, the Phantom isn’t.

One big difference between the two, however, is the CX-20’s shorter flight time and range. Expect around 10 minutes with a camera attached and flying very conservatively.

GoPro compatibility exists for the the Hero 3+, 4 5 models, but the camera mount to the CX-20 is a GoPro mount itself.  Using it this way lets it work with more camera models.

The CX-20 is compatible with various gimbals as well. Power take off pins are available on the bottom of the quad for plug and play gimbal power and control, as well as power for FPV, telemetry, or anything else you want to add to the quad.

Probably the best drone for GoPro on this list, although not the cheapest, is the DJI Phantom 2. With the Phantom 2, you get DJI’s proven drone technology in a more economical package than a more advanced Phantom or Mavic model.

The Phantom 2 V2.0 has nice upgrades like more efficient brushless motors, re-designed self-tightening props and a new transmitter with a built in rechargeable battery.

It also has a VERY impressive flight time of 28 minutes! A 3S 5200 mAh “smart battery” has intelligent regulation to allow the longer flight time.

GPS guidance enables excellent position hold, whenever you let go of the sticks. The Phantom 2 will also return to home and land automatically. Either with the push of a button or due to a fail-safe.

The Phantom 2 is fully compatible with the Zenmuse H3-2D & 3D gimbals, which can be controlled from the Phantom’s transmitter. The standard camera mount is compatible with GoPro Hero 2, 3/3+ & 4 models.

The Holy Stone HS700 drone is a great drone for GoPro with features like GPS positioning and one button take off. It comes with its own 1080p action camera and no gimbal. Live video transmission is also available through a smartphone app, but the range is limited.

Flight modes like position hold, follow me and auto flight paths allow you to focus on getting the shot instead of worrying about controlling the drone. Smartphone app control let’s you pre-program waypoint flight paths for the ultimate autonomous flight.

Holy Stone advertises a 20 minute flight time for the HS700, which beats out all other drones on this list except the Phantom. It’s an impressive flight time, but most likely you won’t get that long with a camera attached.

The HS700 doesn’t have any different speed modes but does have a beginner mode which limits the range of the drone to 50 meters and limits the maximum altitude to 30 meters. This is a nice feature to ensure you drone doesn’t get too far away when you’re still learning the ropes!

If you’re like me, you’re always finding things to attach your GoPro to and drones are a great choice. The ones on this list are the best drones out there for GoPro and I hope you were able to find a great drone for your GoPro.

If you’re looking for some more advanced drones, that comes with gimbled cameras and GPS, check out this article.

Thanks for reading and don’t forget to check out some of our other articles!