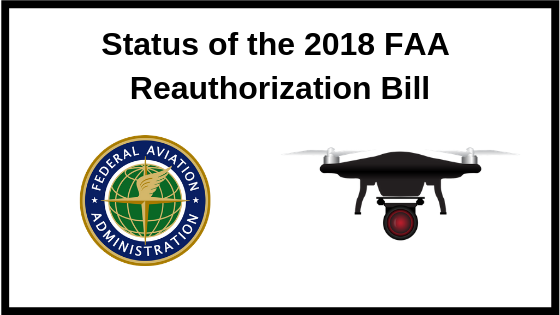 The new law includes a LOT of stuff. The most important being the funding of the FAA for the next five years. But if you’re reading this article on thercdronehub.com then probably the most important parts of the bill for YOU are the sweeping changes for the drone industry.

There are even more changes proposed in the winter of 2019, check them out here.

With the passage of this law, a lot of people seem to think the hobbyist is getting the short end of the stick when compared to commercial drone operators. The act is mostly geared toward prime time commercial usage.

Congress is pretty clear about it with statements in the act talking about the “potential” of the commercial drone industry and how it can “spur economic growth”.

This article is not, by any means, meant to give any sort of legal advice. It is purely for educational purposes only. I am not a lawyer, so please consult one for any legal questions or clarifications.

The FAA Reauthorization Act’s most significant change for the recreational drone pilot is:

The immediate repeal of the Special Rule for Model Aircraft – otherwise known as “Section 336”.

So what does that mean?

It means hobby users aren’t automatically exempted under Section 336 as they were previously. (they were as long as they registered with the FAA, if required to, and followed a set of guidelines)

Section 336 was actually used to prove the FAA’s original drone registry was illegal, in Federal court.  But congress subsequently passed a law in 2017 that specifically reinstated the registry, through legislation this time.

Even know the Special Rule was repealed, there might be some light at the end of the tunnel.

The new FAA bill does say that recreational drones may be flown without specific or operating authority from the FAA. That means no remote pilot license required, if flown strictly for fun.

There’s a small section of the 2018 FAA Reauthorization Act carved out for recreational use, as long as the following limitations are adhered to. If you’re a current drone owner, you’re probably familiar with most of these…but one of them might stand out. Check them out below:

Any drone flights that do not meet ALL of the above criteria must comply with all the general rules and regulations for unmanned aircraft. Basically, you must meet all of the commercial drone requirements (remote pilot license required, etc…)

So you may be wondering…aeronautical knowledge & safety test??

Yep, that’s certainly different from previous/current requirements.  According to the new law, hobby drone fliers now have to pass an online safety test before they can legally fly their drone under the recreational exemption.

The test will cover an understanding of aeronautical safety knowledge as well as knowledge of the FAA’s regulations & requirements for unmanned aircraft operations.

Obviously they can’t implement something like this right away. The Reauthorization Act says that the safety test must be in place no later than 180 days after the passage of this law. That’s about 6 months.

Until then the FAA says you can go by existing rules until all the provisions from the new 2018 Act are in place. The FAA released this statement, clarifying what to do until then.

They basically state that you should adhere to the bullet points above until they provide an update.

Another change with the new FAA Reauthorization Act of 2018, is the explicit definition of a community based organization. They now have to meet certain requirements.  They also need “recognition” by the FAA if they want their guidelines to be valid under the recreational exemption.

The FAA already recognizes the Academy of Model Aeronautics as a community based organization. They’ve been working with the FAA since the implementation of the first drone registry, back in 2015. And they’re most likely working with them on the development of the aeronautical safety test too.

The Act states that the test shall be developed with consultation from drone manufacturers, “other stakeholders” & community based organizations. Having drone companies & hobby organizations provide input to the safety test is a good idea.  It will make sure the test stays relevant and applicable to most hobby users – and not be too far overreaching.

A Couple Other Changes

There are a few more interesting bits also put into this law.  Things that won’t affect most operators but are worth mentioning.

One of them has to do with drones used for underground mining. Yeah, I didn’t know that was a thing either.

Drones used for mining underground are not subject to ANY regulation or enforcement. Why do these drone get a free pass even though they’re clearly being used commercially? They can’t interfere with manned aircraft and federally defined “airspace” doesn’t exist underground.

Another obscure thing this law specifies, and it’s probably a good thing, is that a drone cannot be operated “armed or equipped” with any type of dangerous weapon.

I guess that’s something the government reserves only for themselves?

Remember that video a few years ago of that drone firing a gun?  At that time, it was legal.  Not anymore.

It’s probably a good thing though. You don’t want people improvising and creating their own weaponized drones.

The FAA Reauthorization Act of 2018 covers A LOT of areas and paves the way for a huge expansion in the commercial use of drones in the U.S. The changes for the recreational user are significant too and after reading this, I hope you have a better understanding of what’s coming.

We’re anxious to see what the online safety test will be like, as you probably are too. We’ll be sure to provide an update, when the test gets implemented.