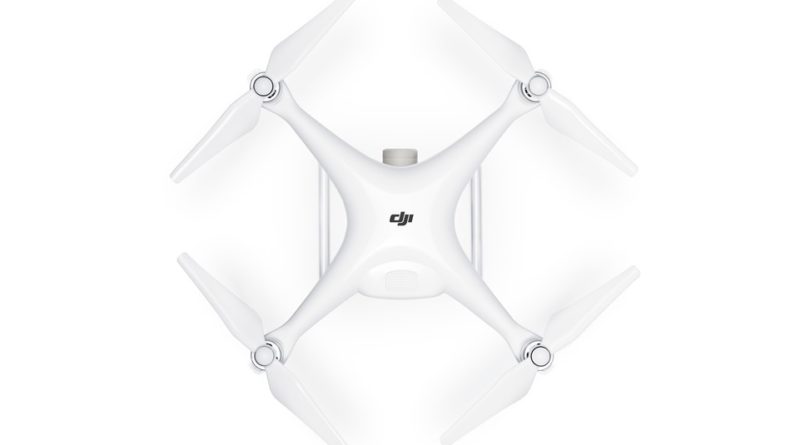 The DJI Phantom 4 Advanced drone is the latest addition to DJI’s Phantom family of quadcopters.  And it will be replacing the regular DJI Phantom 4 at the end of the month (April 2017).

Want something a little smaller, but still loaded with features?  Check out the DJI Spark drone.

The Phantom 4 Advanced feature list is very close to the the pro version, with a few exceptions.

The advanced version of the Phantom 4 loses the rear vision sensors and the infrared sensors too.  As a result, you won’t be able to rely on the drone’s avoidance system when moving backwards, right or left.

This really isn’t a big deal, given that the Phantom 4 Advanced is still equipped with 5 vision sensors in the front and downward directions.  These sensors are a combination of both video and ultrasonic sensing for reliable obstacle avoidance.

DJI gets around this by using slightly different frequency bands for the video and control.  This eliminates the interference and makes the Phantom 4 Advanced cost less by not supporting both the 2.4 and 5.8 bands.

There is one area though where the Phantom 4 Advanced drone surpasses the pro version:

At 1368g, the Advanced is actually lighter than both the Phantom 4 Pro (1388g) and regular Phantom 4 (1380g) quadcopters.  A combination of a magnesium alloy and titanium alloy assist in making the drone’s frame light but still strong and rigid.

Lastly, the Tapfly backward flight mode has been removed.  Again, not really a big deal considering all of the other flight modes offered.

You can see the full comparison here.

The DJI Phantom 4 Advanced drone comes in two versions: the base and plus models.  Each of them are roughly $150 less than their pro version counterparts.

If you get yourself a Phantom 4 Advanced, you’ll be getting the same awesome camera that comes with the Phantom 4 Pro.  It has a whopping 1 inch CMOS sensor and also equipped with a mechanical shutter.

If you opt for the plus version, you’ll also get an integrated 5.5″ Android mini tablet display as well, with the DJI Go 4 Live View app built in.  This is a nice addition.  The screen is super bright, more than twice as bright as conventional smart phones.  This really helps when the sun is out for those daytime flights.  The Live View app will stream the Phantom 4’s video in 720p resolution, at 30 frames per second.

As we mentioned earlier, the Phantom 4 Advanced’s vision system is not as complete as the system on the pro model but still pretty capable with it’s 5 total vision sensors.  The sensors work in both the forward and downward directions and function at up to 30 mph! (compare that to the base Phantom 4, it’s only capable of operating its vision system up to ~ 22 mph)

The 1 inch sensor on the Phantom 4 Advanced’s camera provides an effective resolution of 20 MP, at 3 different aspect ratios.  The camera is attached to a 3-axis gimbal, which means it’s stabilized in all 3 directions but only its pitch is controllable.

One of the nice features of the camera on this quadcopter is the mechanical shutter.  An electronic shutter can result in something called rolling shutter distortion.  This usually happens when recording fast moving objects or flying at high speeds.  The use of a mechanical shutter minimizes this effect.

Burst mode still shots can be captured at 14 fps too.

To accommodate the larger file sizes, the storage capacity increases from the original Phantom 4 to 128 GB (micro SD card).

This mode is basically a type of waypoint control.  Draw a route on the screen and the Phantom 4 Advanced will follow while keeping its altitude locked.  There are 2 draw sub-modes: free and forward.

In draw free mode, the drone will move along the path when instructed to while the camera can face any direction.

Active track mode is able to recognize fast moving objects or still objects when moving at high speeds.  Algorithms in the Phantom 4 Advanced will recognize and track specific objects, while keeping them in frame of the camera why you fly.  The drone is able to recognize many different objects including vehicles, people, animals, etc…

This is a pretty nice feature for capturing some really dynamic, professional looking video shots.

In trace mode, the Phantom 4 Advanced drone will follow behind or in front of the subject while automatically avoiding any obstacles.

Fly along side a subject in many different angles to get profile shots in profile mode.

Spotlight mode keeps the drone’s camera pointed on a specific target while the quadcopter flies in any direction.  This is a great mode for getting some dramatic shots of stationary objects.

With TapFly mode, the Phantom 4 Advanced will automatically fly in any direction visible on the screen (except backward) with a simple tap.  TapFly backward is no longer available due to the removal of the rear vision sensors.  Two sub-modes are available in TapFly:  forward and free.

In forward mode, simply tap on the screen to fly in any direction.  The quadcopter will fly forwards in that direction, which keeps the camera pointed forward as well.

Free mode allows the drone and camera to face any direction, while flying to the point selected on the screen.

In gesture mode, selfies can be easily captured by the Phantom 4 Advanced with simple hand gestures.

The process is pretty easy.

Raise your arms to have the camera lock you in frame, then hold your arms out when you’re ready.  This will trigger a 3 second countdown before the drone takes the shot.

If you’re already familiar with GPS drones, then you probably already know about return to home mode or RTH.  Drones equipped with this mode will return to the place where it took off from and land, by itself, as a fail-safe or when the mode is activated by pilot.

Return to home is way cooler on the Phantom 4 Advanced because DJI  incorporated some advanced decision making into the process.

The Phantom 4 Advanced will automatically choose the best route back to its home position.  It records the route as it flies which allows it to return along the same path, avoiding obstacles, if the control is disconnected.

The quadcopter uses its vision sensors to pick a good landing spot and can even recognize water!  It will not auto land on water.  Instead, the drone will alert the pilot and hover above it, which allows the pilot to then take over and land it safely.  Very cool! The death of one drone leads to the birth of another…

The DJI Phantom 4 is being discontinued on April 30, 2017.  But that is the very same day that the Phantom 4 Advanced drone will begin shipping.

With this move DJI has made the Phantom 4 Advanced one of the most affordable, intelligent and powerful flying cameras you can find…and an economical alternative to the Phantom 4 Professional as well.

What are your thoughts on the Phantom 4 Advanced quadcopter?  I’d love to hear what you think, feel free to drop a comment below!